WASHINGTON (Reuters) – The Supreme Court on Wednesday [02.27.2013] will consider whether to strike down a key provision of a federal law designed to protect minority voters.

During the one-hour oral argument, the nine justices will hear the claim made by officials from Shelby County, Alabama, that Section 5 of the Voting Rights Act is no longer needed.

The key issue is whether Congress has the authority under the 15th Amendment, which gave African Americans the right to vote, to require some states, mainly in the South, to show that any proposed election-law change would not discriminate against minority voters.

Conservative activists and local officials in some jurisdictions covered by the provision have long complained about it, saying that it is an unacceptable infringement on state sovereignty.

Hans von Spakovsky, a senior legal fellow with the conservative Heritage Foundation who formerly worked in the Justice Department’s civil rights division, said that the “terrible history” that warranted Section 5’s intrusion on state authority was over. 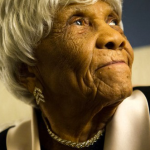 So let’s ask Ms. Desilene Victor a 102 year old Florida voter if that “terrible history” is over. It took Ms. Desilene six hours to vote during the 2012 Presidential Election. A bill has been introduced by Florida State Senator Oscar Braynon.

Senator Braynon’s bill–SB 888 or Desiline’s Free and Fair Democracy Act–hopes to “modernize the state’s voting system and enshrine the right to vote into state law,” according to an Advancement Project press release.