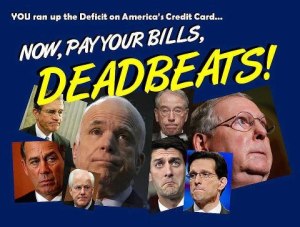 House Minority Leader, Nancy Pelosi clearly advocated invoking the 14th Amendment last Sunday on the CBS’s, Face the Nation, and now there are reportedly several Democrat members of the Senate that would back President Obama if it came to that. Even though I still don’t think that President Obama will invoke the 14th Amendment, it’s good to know that Democrats are showing solidarity against right-wing extremism and GOP brinksmanship. Isn’t it funny, to Rep. Nancy Pelosi’s point, that Republicans never had any issues with raising the debt ceiling during the deficit-creating Bush years? Section 4 of the 14th Amendment states as follows:

If the 14th Amendment were invoked by President Obama, Section 4 would definitely be challenged relative to its interpretation and application, but I think it very clearly indicates that valid public debt (any debt not deemed as illegal) “shall not be questioned.” With each balk by the GOP at raising the debt ceiling, they are challenging the very legality of the debt which Congress has already legislated. That is an oxymoron.

Edward Kleinbard’s opinion piece in the New York Times entitled The Debt Ceiling’s Escape Hatch offers an interesting solution to the coming federal debt ceiling fight between the White House and Republicans in Congress. He proposes that President Obama issue “registered warrants” also known as scrip. The non-technical term would be an I.O.U. In fact, the state of California, successfully, issued I.O.U.’s as recently as 2009 when it faced its own budget crisis. Kleinbard writes,

“The scrip would not violate the debt ceiling because it wouldn’t constitute a new borrowing of money backed by the credit of the United States.”

Who can say whether or not this would be the best approach, but the alternatives are probably worse. If President Obama were to heed the House Minority Leader, Nancy Pelosi’s advice and invoke the 14th Amendment, Republicans in the House, no doubt, would move toward Articles of Impeachment. Given President Obama’s pragmatic political disposition, I just don’t see him doing that.

Edward D. Kleinbard, a former chief of staff at the Congressional Joint Committee on Taxation, is a law professor at the University of Southern California.

How stupid of McConnell when you are forced to filibuster your own bill. Read the full article at http://maddowblog.msnbc.com/_news/2012/12/07/15751006-what-we-learned-from-mcconnells-failed-gambit