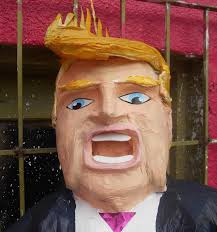 The Book of James declares the tongue, “a restless evil, full of deadly poison”. This is evidently true of Donald Trump’s rhetoric which endangers the American people in the United States. History has taught us that murder begins with hate speech. Study Germany in the 1930’s. History has a way of repeating itself. Trump’s irresponsible speech strikes a chord with fearful haters who desperately want to “take their country back”.

The election and presidency of Barack Obama has frightened “The Donald” supporters. These are the immigrant haters. It was hate speech that led to the murder of nine blacks in South Carolina. Hate speech has also defended trigger-happy policing resulting in the repeated shooting deaths of primarily black and brown people in America. We may have freedom of speech, but there must accountability for speech that incites violence and hate crimes.

Trump’s voice is like nuclear waste, environmentally toxic and cancerous. The GOP has created a monster and they cannot control him. Trump claims that Hispanic people will vote for him, but he knows the truth. They will never vote for Trump! He will cost the GOP the general election as he repeatedly offends Hispanics, Muslims and women. He even offends Republicans. The GOP is deserving of Trump for their racist treatment of Obama.

While it pleases me that Trump is a problem for the Republicans, it also troubles me that he is a calculated blowhard that must keep up the rhetoric of hate speech for his followers — fascist bigots.